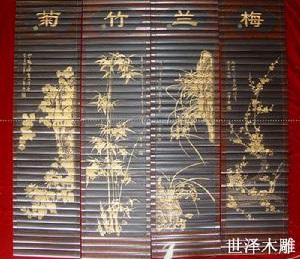 China is one of the first people in the world to use bamboo and make the best use of bamboo. The bamboo is strong and compact, and it is imaginary and clean. It looks oily, has a color close to amber, and has a strong, tough character. It is considered to be auspicious. Before the Ming Dynasty, hand-made bamboo carvings and well-known carvings were scarce. From the middle of Ming Dynasty to the Qing Dynasty, famous bamboo carvings came out in large numbers, transforming the art of bamboo carving from practicality into a work of art for people to appreciate. Bamboo carving art of the Ming Dynasty was mostly concentrated in Jiading (now Heiding County, Shanghai) and Jinling (now Nanjing), divided into Jiabao and Jinling factions. The profound methods of Jiading Zhu Song's three generations of grandfathers (referred to as reliefs and round sculptures), the shallow carvings of Jinling Li Yao and Qi Zhongqian, and the early Qing dynasty carving of Zhang Xihuang in the early Qing Dynasty made outstanding contributions to the development of bamboo carving art. Three Zhu used the deep relief and round carving techniques. The relief is divided into two types: shallow relief and high relief. Both the openwork and the openwork belong to the carving method of the Yang Dynasty, which can increase the three-dimensional effect of the objects. The method of engrave bamboo is to scoop up more bamboo lands, make the jewellery accentuated on it, and can separate the layers. The high relief can be divided into five or six layers, so that the artifacts have a sense of perfection, and the three Zhu bamboo carvings are vivid and powerful. Characters and animals are naturally natural. The founder of the Jinling faction in the Ming Dynasty, Kuang Zhongqian, was different from the Garbo faction in that it was not meticulously crafted. It was only about its natural form, and it was slightly chiseled. Most of his works are applied to natural carvings, making the artifacts quaint and lovely. The main techniques of the Jinling School are shallow carvings, that is, the engraved carvings in bamboo carvings. This carving method is not only wired but also surfaced, and the carved scene can reproduce the pen-and-ink style of calligraphy and painting. In the middle period of the Qing Dynasty, there was a left-inscription method, also known as â€œsticky spring,â€ â€œbamboo,â€ and â€œbamboo spring.â€ After cooking, drying, pressing, gluing, or inlaying on wooden tires and bamboo tires, they were polished. , And then carved in the above calligraphy and painting decoration, due to the spring clean and flawless, tender spring Jiaorun, like **. The characters using this technique are represented by Zhang Xihuang.

In the early Qing Dynasty, he inherited the traditional techniques of bamboo carving techniques after the middle of the Ming Dynasty, devaluing the first player of the Jiading faction Wu Zhiyu. He created bas-reliefs to highlight the subject matter and left the background as a backdrop to the carving of the Northern Wei Dynasty relief technique, portraying vivid characters. The water bamboo carving family represented by Feng Xijue and Feng Xilu has been passed down from generation to generation or more. Feng Xilu was a round-carved eagle and was a bamboo root figure. In the forty-two years (1703) of Emperor Kangxi, he entered the capital to cultivate the temple with bamboo craftsmanship. The name was noisy. This is the beginning of the service of the bamboo carving artists. Between the cadres and the cadres, the engraved bamboo masters of the Jiading faction can push Zhou Yi. He has certain accomplishments in calligraphy and painting. He is good at engraving landscapes, figures, and trees. He uses Nanjing painting techniques to engrave bamboo art. He uses knife marks to express ink and ink. The knife blade is beautiful, and it has a greater impact on the art of bamboo carving in the late Qing Dynasty. Big. From the time of the bamboo carving to the Qianlong period, it was at its peak. After Jiadao, it was replaced by a stylized spring. The area was not limited to Jiading and Jinling but expanded to the southeastern provinces, mainly in Zhejiang Province.